All the times we spent together...
Wednesday, 14 December 2011
I tried to do the courses... and halfway through I gave up because I realised I was going to fail miserably. And I realise half the class is in NUS because practically all the girls are in NUS, plus a few guys and it's more than half.

Haha is this blog going to experience a revival? (:

Alright, 1 more exam to go! I think everyone here is done. ):

oh and looking at the nicknames that everyone had, I think like half of them no one even uses it anymore... but then, animals like penguin, ostrich and dinosaur (is dinosaur even an animal) don't just go away just like that.

I know I've said it to some people before, but this is class blog worthy.

My psych lecturer was saying -- "If I mentioned birds, what would be the first few types of birds you would think of?"

(I obviously thought of penguin and ostrich)

And then he said "I am pretty sure none of you would think of penguin and ostrich".

I almost burst out laughing. lol.

okay at least I think it's funny. go ahead and ignore if you don't think so. hahaha.

alright. i'm going to -facebook- now for my last paper.

alright, since nobody has been posting, i shall just post casually about everyone's lives now.

the 67 boys have GROWN UP! finally ord-ed (ord loh!!) and everyone is continuing their studies in some corner of the world.

and bob is still in hci, getting married soon (i think).
still as HOT as ever woohoo!

okay, dont ask me to list the courses.
thats simply TOO challenging.
but we have grooming accountants, doctors, engineers, psychologists, economists and i-dunno-already hahaha.

popped by blogspot again so i just decided to post. i know no one will see this though.

and i have nothing to say. but just to keep this alive anyway. xD --- doing what i always do. lol.

around 2-3 if you want to catch a movie. i think i have 4 free tickets to use up at engwah so it's a good chance for everyone to pay less. :P

around 5-6 if for dinner only. i was thinking of going popeyes to eat. it's a random idea, but the main point is just to catch up la. yeah but anyway, probably the singapore flyer one.

hence, meeting place will be around city hall i guess?

i can't confirm anything, and i need someone to gather interest. :P yongqiang you can do it for me. :D whatever it is, i guess as long as there's willing people this will go on lah. as in like i think 5 people we'll just go on with it anyway.

Sunday, 25 October 2009
helloooooo! i'm bored and so i decided to leave a random post here. :D

we should have a class outing to sentosa! someone please plan hehehe.

errs okay yeah this post has been totally random. 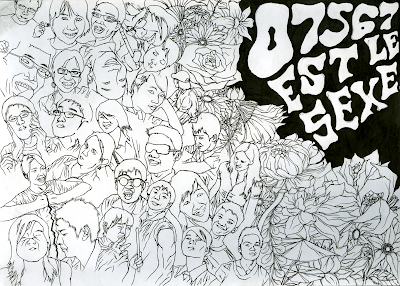 HEY YA CLASSMATES! this is gonna be our class page in the prom magazine!!! ehhhh i dunno how zai the prom magazine is la but anyway....THE DESIGN IS VERY NICE RIGHT? yeahhhh mannn say yes (you're supposed to say yes) cos... IT'S DONE BY JOSHUAAAAAAAAAAAAAAAAAAA. OOOOOOMPHHHHH HE'S VERY ZAI RIGHT I MEAN LOOK AT THE NUMBER OF LINES HE HAS DRAWN I THINK I WILL HATE LINES FOREVER IF I EVER HAD TO DRAW THIS SO....LET'S ALL GIVE A VERY BIG OOOOOOOOMPHHHHHH FOR HIM YEAHHHHHHHHHHHHHHHHH.

i really think that xinyi looks like xinhui with earrings. sorry xinyi, and i'm not sorry xinhui i think you're secretly happy. andy looks like he's sniffing peckhwang while peckhwang is...trying to imitate andy sniffing her???!!! oh yeah if you're wondering what the words mean, don't ask me cos i dunno as well. i think it's french. maybe it's MS BOBILLIER SOPHIE MARIE CHRISTINE... in french. besides that, don't you think...DARIUS'S arm is TOO BIG TO BE TRUE? i think it is, cos YUANXIN is laughing at him as usual and is in the process of using her chopstick to poke his arm to test whether it's all just silicon. AND BLOODY SHIT ZHIHONG IS DRIPPING OIL ON ME.

ehh, whose parents are civil servants and can book aloha chalets at a cheaper rate? thinking that we shall try for aloha loyang this year. :) instead of that ulu changi one. okay i'm asking here for fun cos i bet no one's reading this. :P rather, who is feeling nice and wants to book. lol.